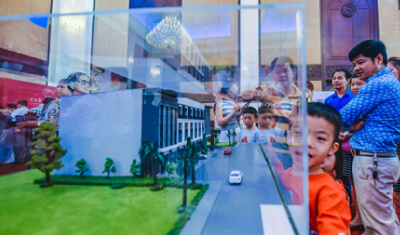 The Park Land 598 at Sofitel Phnom Penh Phokeethra Hotel on June 17 2017 by presenting the whole project on big screen. It is the first time ever for a local property developer to launch a project on such a giant screen. The event attracted hundreds of customers.

The Park Land 598 is located on Street 598 (H.E. Chea Sophara Street) in Chrang Chamres 2 Commune, Russey keo District, Phnom Penh, about four kilometers from Camko City roundabout. This project is easily accessible as it is linked to main roads such as National Roads 4, 5, and 6. In addition, the project is very convenient, located in development and commercial areas accommodating superstores, restaurants, cafés, banks, international schools and golf courses.